Lake in the Clouds audiobook available!

Cave Beneath the Sea now available as audiobook! 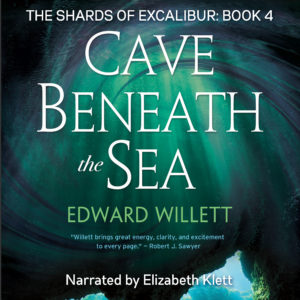 Cave Beneath the Sea, Book 4 in the Shards of Excalibur series,  is now available in audiobook format through Audible.

Elizabeth Klett once again narrates, as she has for the previous three books in the series, and once again does a fabulous job.

Seeking to recover the shards of King Arthur’s sword Excalibur before Rex Major (the ancient sorcerer Merlin in a modern-day guise), Ariane and Wally have traveled around the world, and their quest is not yet over. Ariane’s magical powers as heir to the Lady of the Lake, combined with Wally’s clever thinking, have enabled them to hang on to two of the three shards they’ve located so far – but Rex Major still has one shard of his own and will stop at nothing to claim all the pieces for himself and use its power to rule Earth and invade the magical realm of Faerie.

And now Major has his eyes on a big prize: Ariane’s mother, who went missing after she refused the power of the Lady of the Lake.

Ariane and Wally race to the Caribbean as they try to find Ariane’s mother and the fourth shard of Excalibur before Major does. As they struggle to stop Major, Ariane and Wally face desperate danger…and must make the most difficult decisions of their lives.

“Edward Willett has created as exciting a read as the earlier books in the series, continuing to develop his characters and their relationships while the action-filled plot carries the reader to intriguing national and international locales…. It’s hard for me to decide which is the stronger foundation for the story, the characters or the plot, as both are substantial and intricate.” (CanLit for Little Canadians)

“Cave Beneath the Sea will appeal to young readers in search of adventure as well as adults who enjoy another version of the timeless story of King Arthur…. Recommended.” (CM Magazine)

And here are links to the audiobooks of the first three in the series:

Permanent link to this article: https://www.shardsofexcalibur.com/2018/09/22/cave-beneath-the-sea-now-available-as-audiobook/