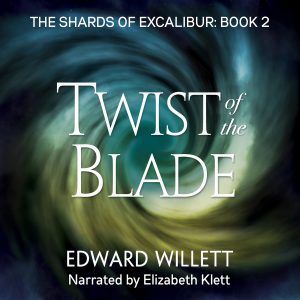 Twist of the Blade is now available in audiobook format, narrated by the wonderful Elizabeth Klett, who previously narrated Song of the Sword and will be narrating the entire series over the course of this year.

Audible reviewer Krista Jasper writes, “Elizabeth Klett does a great job of narration and bringing the characters to life. It isn’t easy to do justice to the voice of a teenage boy and then a middle aged British magician…I would recommend this story to anyone who enjoys a mystery wrapped in Fantasy and Lore.”

Having saved the first Shard of the sword Excalibur from Internet mogul Rex Major (aka Merlin), Ariane and Wally are on the lookout for the second. Wally is worried that the power of the first Shard is already changing Ariane, giving her the strength to do good and evil, and when she badly injures his bullying sister, Flish, it seems he’s right.

Meanwhile, they have a serious problem: Ariane’s located the second Shard in France. Sure, her inherited powers from the Lady of the Lake enable her to travel magically through fresh water, but it hasn’t escaped their notice that there’s a huge saltwater ocean separating them from their next target. And Rex Major is already on his way there.

As Major uses Wally’s doubts – and his secret wish to be more than just a nerdy sidekick – to cause a rift between the friends, Ariane takes the chance to go it alone. But if the first Shard’s power is barely controllable, how will she fare when two Shards are united? And what can Wally do to get his friend back?

“The sequel to Song of the Sword improves on its foundation…. Willett realistically explores the difficulties Ariane and Wally face and paints Rex Major in such a light that readers may be unsure as to whether he is a master manipulator or misunderstood hero… Engrossing.” (Kirkus Reviews)

“A satisfying second instalment… Twist of the Blade offers an enticing sense of danger and excitement… It’s refreshing to read a story in which the heroes and villains are not cut-and-dried, and readers can look forward to three more instalments in this genuinely entertaining myth-based series.” (Quill & Quire)

Go forth and listen!

Permanent link to this article: https://www.shardsofexcalibur.com/2018/06/09/twist-of-the-blade-audiobook-now-available/