Return to About the Series 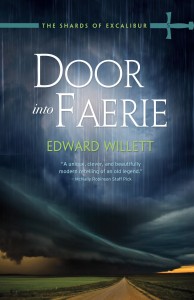 “This fifth book is as forged with magic, conflict, action and travel, as well as a little history, as the earlier four books…but family, which has always been important, becomes paramount. Brothers and sisters Merlin and the Lady of the Lake, and Wally and Felicia, as well as mothers Emily Forsythe and Jessica Knight, drive the story, and ultimately help resolve its plotlines, a monumental task in a fantasy based on the Arthurian legends. Yet Edward Willett accomplishes this easily with his consistent intensity and fluidity of plot progression…” – Helen Kubiw, CanLit for Little Canadians

“Door into Faerie will appeal to young readers in search of adventure as well as adults who enjoy the timeless story of King Arthur. It represents a suitable ending to a story of youthful characters who have wandered the world and suffered several successes and failures in search of their goal. Highly recommended.” – Ronald Hore, CM Magazine

“The overlay of the Arthurian legend on a modern Canadian context continues to work well. As a quest epic spanning five novels, the plotlines and character development are all brought to a satisfying conclusion. Readers who have followed Ariane and Wally’s relationship will be pleased that this Arthurian tale has a happy ending.” – Resource Links

“…I read it without reading its predecessors, and also, admittedly, with a bit of a bias against the fantasy genre. Magic shmagic. I’ve oft said that what I really value in literature is contemporary realism: stories I can connect with via details from the here and now, geography and language I can relate to because I recognize it, I speak it. The old “holding a mirror to the world” thing. Well surprise, surprise: I loved this YA fantasy. Willett wields his well-honed writing chops from page one, and my interest was maintained until the final word…I can’t imagine teens not enjoying this entertaining story, perhaps especially if they’ve read the books that’ve preceded it. This adult enjoyed it, too … magic and all. ” – Shelley A. Leedahl

Cave Beneath the Sea: 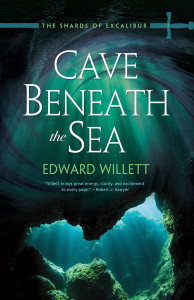 “The author has created interesting characters as the villain and the heroes all have occasional uncertainties about their actions…Cave Beneath the Sea will appeal to young readers in search of adventure as well as adults who enjoy another version of the timeless story of King Arthur…Recommended.” – Ronald Hore, CM Magazine

Lake in the Clouds & Twist of the Blade: 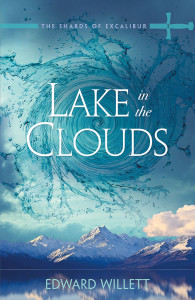 Twist of the Blade: 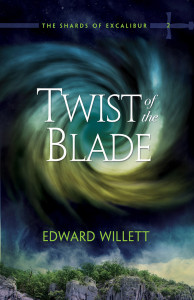 Song of the Sword: 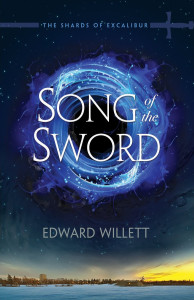 “This is a fantasy of epic proportions, with the perfect blend of suspense; well-developed, likable characters; and a touch of sarcastic humor. Ariane and Wally need to find four shards and the hilt of the sword, ensuring readers that this is just the beginning of the fantastical journey.” –School Library Journal, Feb. 2011

“Every so often … a writer is skilled enough to utilize the stories of King Arthur and Camelot to significant effect. Guy Gavriel Kay’s Fionavar Tapestry Trilogy is definitely on the list. So, too, is Song of the Sword, the impressive new YA novel from Regina writer Edward Willett … a taut, compelling narrative, well-drawn characters, and a keen sense of genuine peril and true wonder. It’s a powerful, fun, engaging read, and it’s the first of a series, so readers have much to look forward to.” – Quill & Quire, Sept. 2010

“One thing that makes this tale different from many in the genre is that it is set in Regina, SK, and full of other Canadian place names, such as Yellowknife and Toronto … Written clearly, and with an interesting version of the Arthurian legend, the tale portrays some common teenage problems through the eyes of the two main characters, while placing them in harrowing fantasy situations … The story will appeal to those who enjoy fantasy and will not require a knowledge of the Arthurian tales to follow.” – CM: Canadian Review of Materials, Sept. 2010

“Willett has constructed an exciting plot that features a teenage orphan (Ariane) and her scrawny but smart sidekick (Wally) … Song of the Sword will certainly have appeal to enthusiastic young fantasy fans.” – Resource Links, Oct. 2010

“Willett’s novel will please fantasy junkies with its intricate details; yet there’s also an appealing poetry to Ariane’s story, best manifested when she learns to use her powers to merge with water and transport herself wherever it flows. Song of the Sword is a unique twist on the old subjects of teenage rebellion and self-discovery.” – Montreal Review of Books, Nov. 2010

“… an exciting plot that gives a great new spin to a favourite story. It can also take credit for a great cast of characters … set up to play out what might become the battle of the ages. I can see that exciting adventures await as they all struggle to decide what’s worth fighting for: power, friends, or family.” – think. thank. thought. (book review blog), Nov. 2010

“… it was very well done indeed … Willett did an excellent job here … Ariane [has] quite a bit of personality and spunk … Wally is definitely my favorite character. He’s got a bit of King Arthur potential, but he’s so very quirky … I sense his sister becoming a bit of a Morgan le Fay character, which should prove to be entertaining.” – Word for Teens (book review blog), Nov. 2010

Permanent link to this article: https://www.shardsofexcalibur.com/about/reviews/

About the Series Reviews