New review of Twist of the Blade audiobook calls it “fast-paced, entertaining” 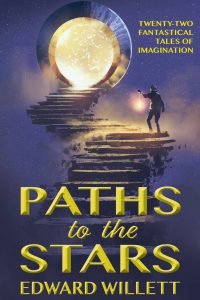 My new short-story collection, Paths to the Stars: Twenty-Two Fantastical Tales of Imagination, has just been released by Shadowpaw Press. The stories in it span my writing career–the oldest is one I wrote at age 19 (or possibly 18, I’m not sure) at Harding University; the newest just came out earlier this year.  They’re roughly fifty-fifty young adult and adult stories (but don’t worry, the “adult” stories are also YA-friendly).

Where can you get it? Well, you can buy it in all popular ebook formats or get an autographed directly from me through my new online shop (where, I’ll remind you, you can also order any or all of the Shards of Excalibur books!)

You can also buy it at any of these links:

From Edward Willett, Aurora Award-winning author of Marseguro, The Cityborn, and Worldshaper (DAW Books), among many others, comes twenty-two tales of fantasy, science fiction, and horror, drawn from a long career of telling fantastic tales.

From the far future and the farthest reaches of space to the Canadian prairie, from our world to worlds that have never existed to world’s that might some day, rich realms of imagination and the fascinating characters and creatures that populate them await within these stories, some previously published, some seeing print for the first time.

And the first review…

“From exploding fruits and vegetables to a shrine on the moon, dedicated to the memory of a devastated Earth, these stories will not disappoint. If you’re a Fantasy and Science Fiction fan like I am, you’re sure to enjoy this rollercoaster of stories every bit as much as I did. I can sum my thoughts up in two words: ‘READ THEM!'” – Lorne McMillan, Author of Isaac’s Blood

Permanent link to this article: https://www.shardsofexcalibur.com/2018/07/11/new-short-story-collection-published/